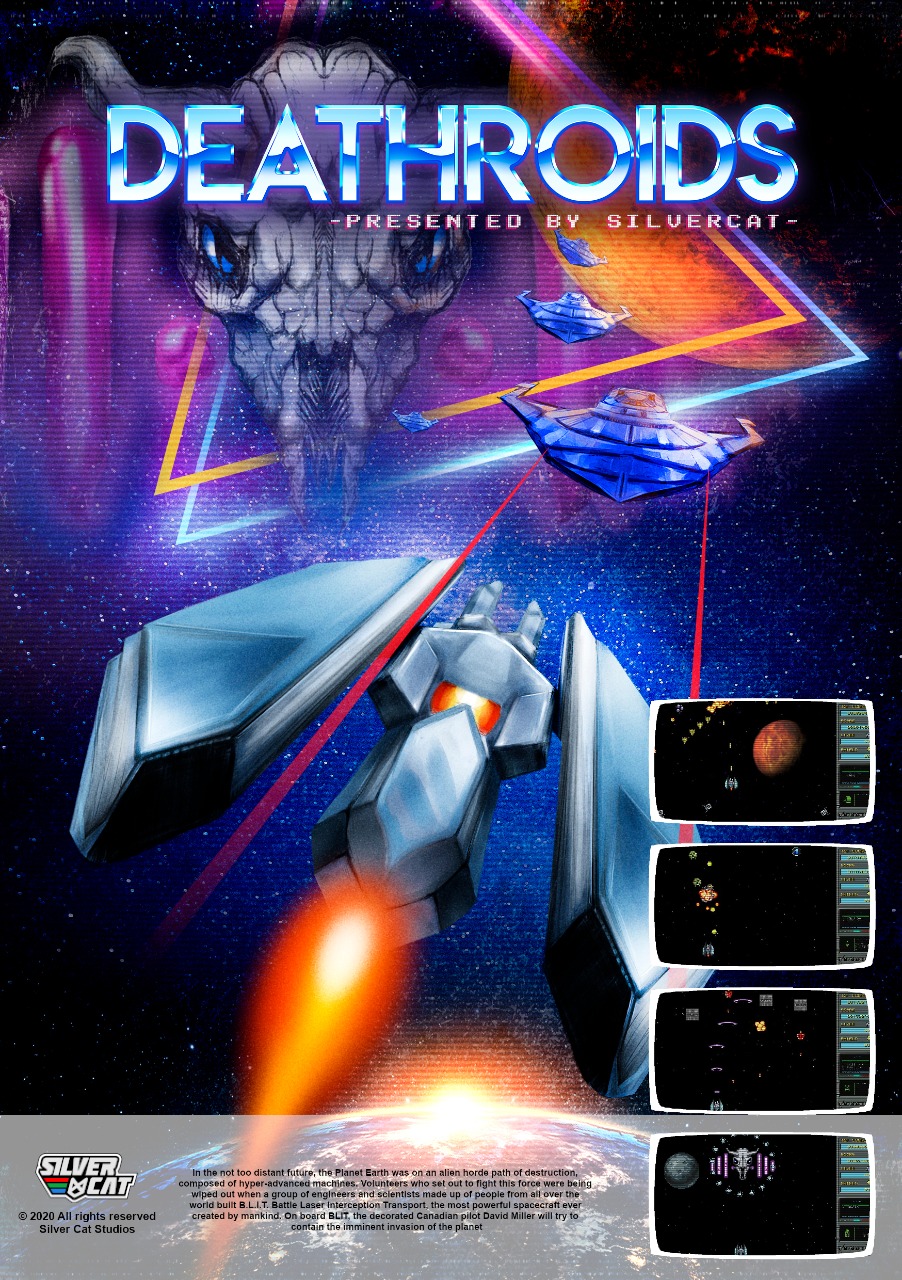 A challenging vertical shmup with a marked retro influence, based on the memorable titles of the 1980s, filled with a high dose of adrenaline and a remarkable original soundtrack.


Speed, fluidity and challenging enemies make the game a current example of what is sought by players of the style. The author, Alfredo Saldanha, is a confessed retrogamer and a lover of old-school spaceship games. “Deathroids is an experience that takes us directly back to the 1980s, when we played titles such as Aleste and Zanac on MSX, Xevious and Star Soldier on arcades. Not only does the game presents an electrifying challenge, it also comes with a soundtrack that will stay with you. "

Simplicity and to the point, as in the old days!

Deathroids does not bring a multitude of collectible items, does not let you choose between different ships, has no cutscenes and does not provide the player with any special attacks. The game design focuses on simplicity: that the player develops his own skill to be able to overcome challenges with just a few weapons and a limited number of lives, where it will be required to learn the movements and weaknesses of enemies in order to move forward. Just like the best spaceship games of the past.

The game has a balanced difficulty that seeks to captivate both casual and experienced players. The levels are progressive and challenging, in a well-dosed mixture of pain and achievement, where adrenaline comes by executing evasive maneuvers and shots at the right time, in a growing level of difficulty, bringing fun to everyone.

Structured waves of enemies require players to improve upon their reflexes and learn from their mistakes, seeking to develop new strategies with each life lost. The player must find the best way to go through each phase while preserving their lives and choosing the best weapons and routes to overcome each situation: cannons, temporal enemies, platforms, indestructible objects, everything that a good 80's shmup asks for.

At the end of each of the five levels, the player will face one of the terrifying bosses. And in Deathroids, bosses don't get the title by accident. The game is not extensive, but it will test your skills.

Assorted power ups that increase your firepower and speed will make your journey easier. In addition, there is a lateral force field defence system that allows the player to absorb damage from collisions and shots. Depending on the level of difficulty chosen, the player will receive a number of "shields" for voluntary use or, in the case of choosing the 'hard' option, in addition to voluntary use, each shield power up will also be automatically triggered. The shield has a useful life of 10 hits or - in the case of the 'hard' option – only 5 seconds.

Preserve your lives at all cost, as you will only get another one when you find an extra life power up. This will require the player to be cautious even on easy mode, if you want to get as far as possible and put your name in the Deathroids hall of fame!

Deathroids features an original soundtrack created by Synt5 in the style of the best soundtracks from the 1980s arcades, and entirely produced within the limitations of 16bit sound systems. Covering diverse styles, from hard rock to groovy music, the soundtrack adds a tasteful touch to the game experience, making you eager to hear the music of each next stage.

The game will be released on October 12, 2020 on the Steam platform, with an excellent release discount. It will also be possible to purchase the soundtrack separately or through a bundle with an even greater discount for joint purchase.It will be available for Windows, Mac and Linux devices.

With very low requirements for hardware and storage space, Deathroids is a considerably light game that can be run on modest computers. 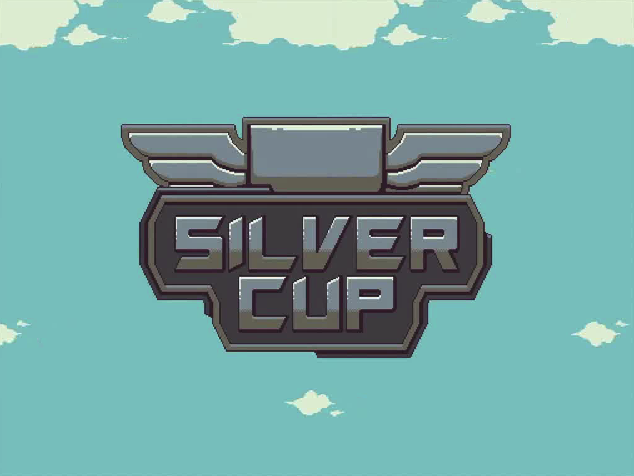 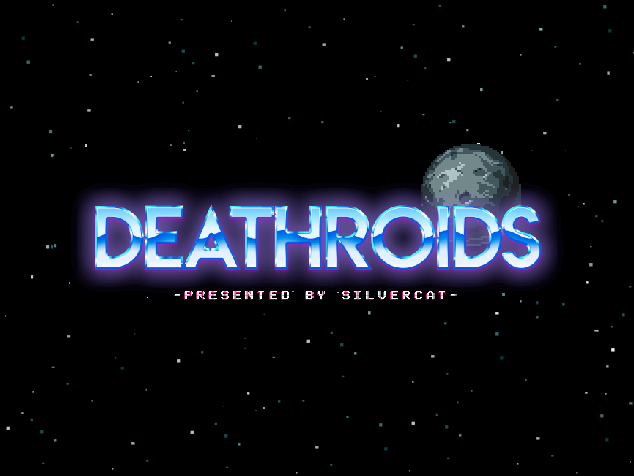 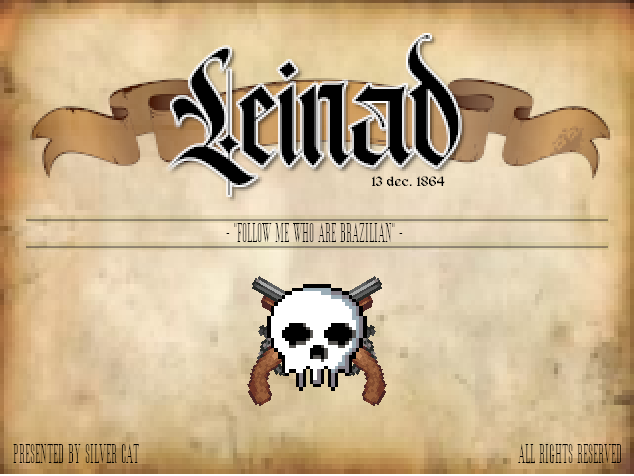 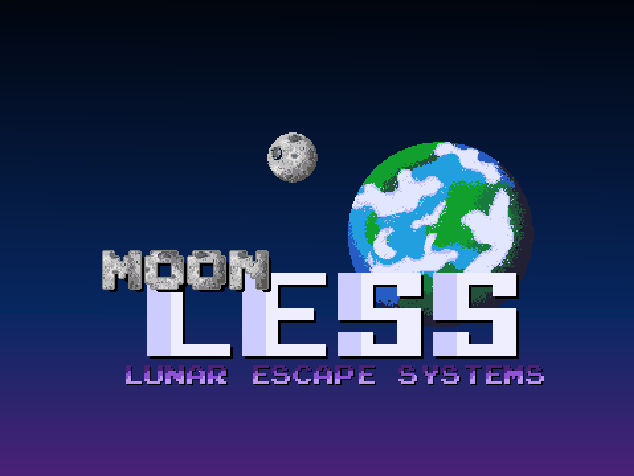 A little bit about our story.

Get in touch with us. 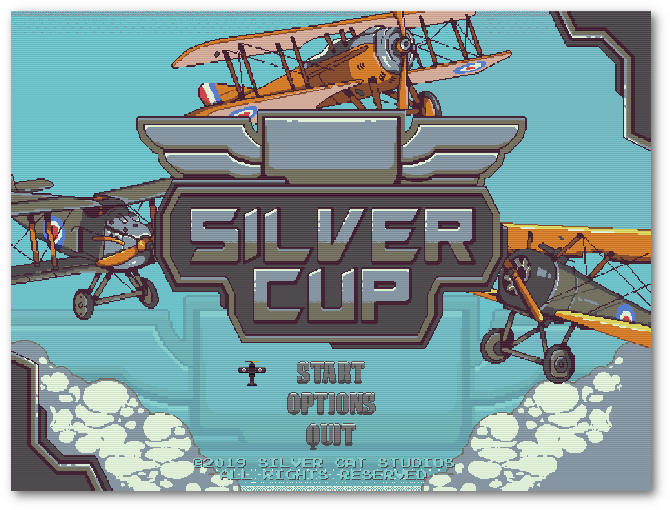 1917, the WWI has its peak aerial combat. A British reconnaissance aircraft photographed a region in the north of France occupied by the Germans, when suddenly a German fighter appears in front of him, a red Fokker Dr.I piloted by Manfred von Richthofen, immediately the English aircraft tries to make a withdrawal maneuver, but is slaughtered quickly and with no chance of escape. In the plane shot down was the pilot Peter Smith, brother of the novice pilot Mark Smith, who received the news and decided that would avenge the your brother's death. Mark steals a RAF plane and leaves for France on a suicide mission to knock down as many German airplanes as possible.

The game is a 2D side scrolling shoot-em-up, with ambiance of the WWI. The player pilots a model English plane to choose among: Sopwith Pup, Sopwith Dolphin and Spad S.VII. Your mission is to reach the end of the 4 phases that make up the game, passing all the bosses. The aircraft is controlled through the 8 directions, a firing device and a loop (limited) to avoid being hit. Through power-ups, the player manages to improve his speed, fire and launch of bombs. Also gets extra loops to use.

The game is in Beta phase.

Before we create a install package, to this tests phase, you have to decompress the zip file in C:\ to it works. 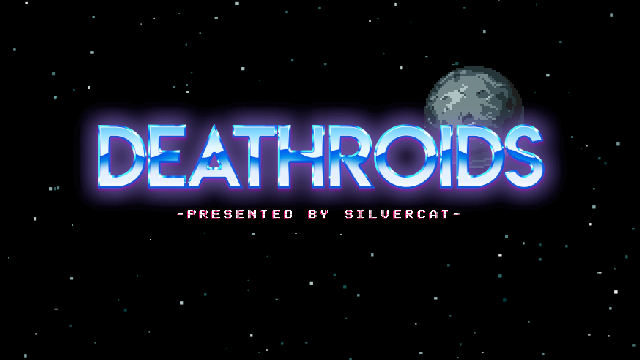 In the not too distant future, the Planet Earth was on an alien horde path of destruction, composed of hyper-advanced machines. Volunteers who set out to fight this force were being wiped out when a group of engineers and scientists made up of people from all over the world built B.L.I.T. Battle Laser Interception Transport, the most powerful spacecraft ever created by mankind. On board BLIT, the decorated Canadian pilot David Miller will try to contain the imminent invasion of the planet. 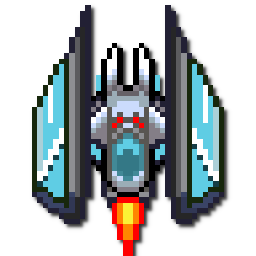 This is a classic vertical shooting game, with simple mechanics, where the player must pass through several waves of enemies without touching them and without being shot obviously, because there is no life bar. 80's arcade style, the game has a good variety of enemies, consequently challenges of pure skill. 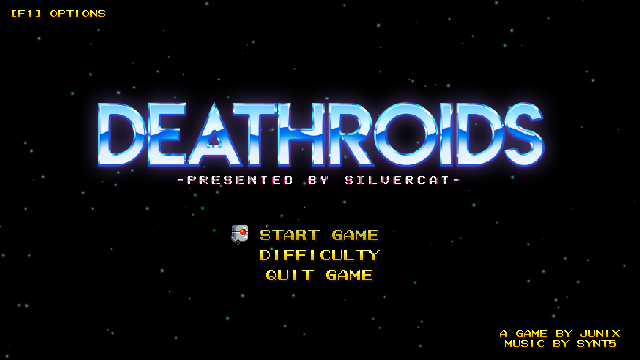 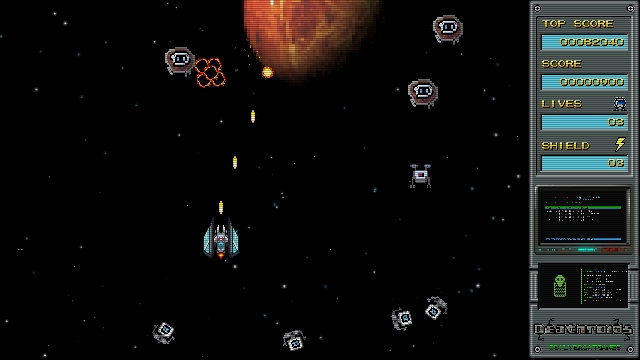 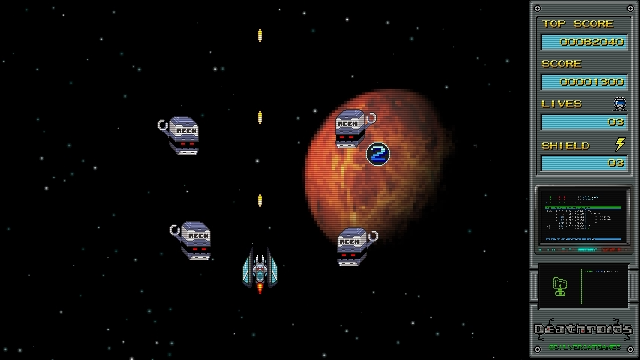 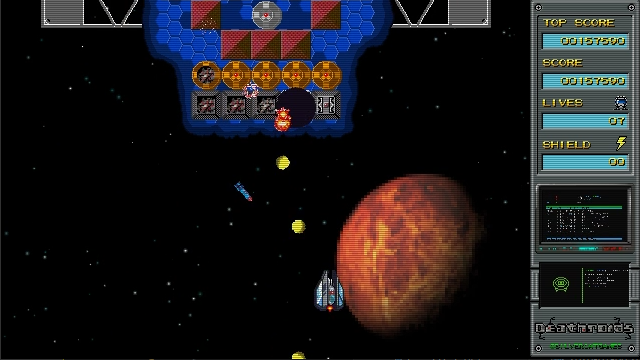 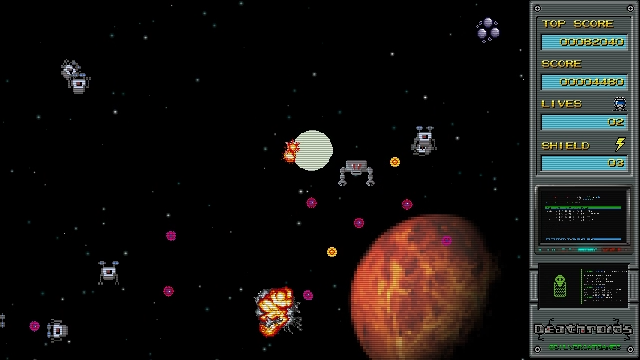 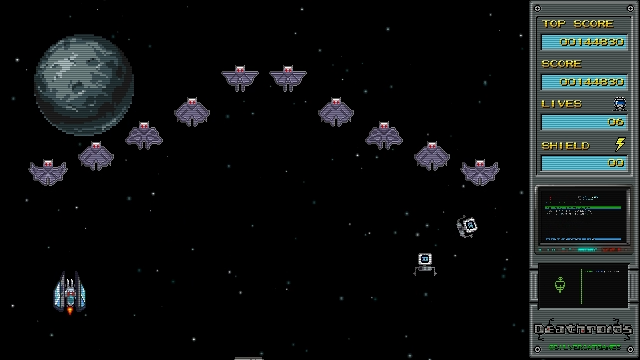 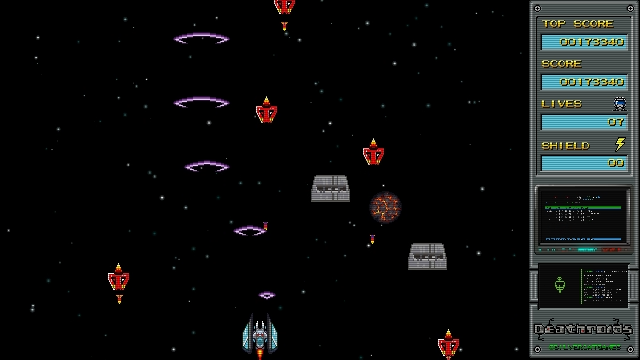 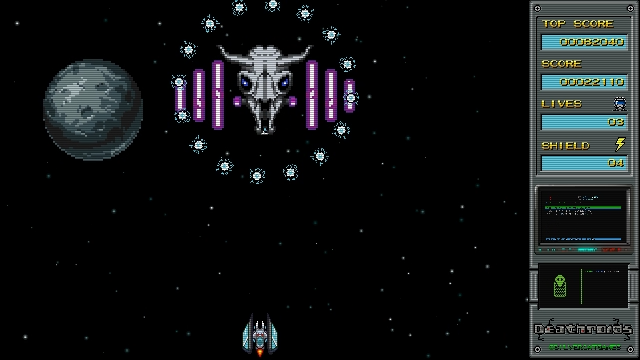 The game is released..

Before we create a install package, to this tests phase, you have to decompress the zip file in C:\ to it works. 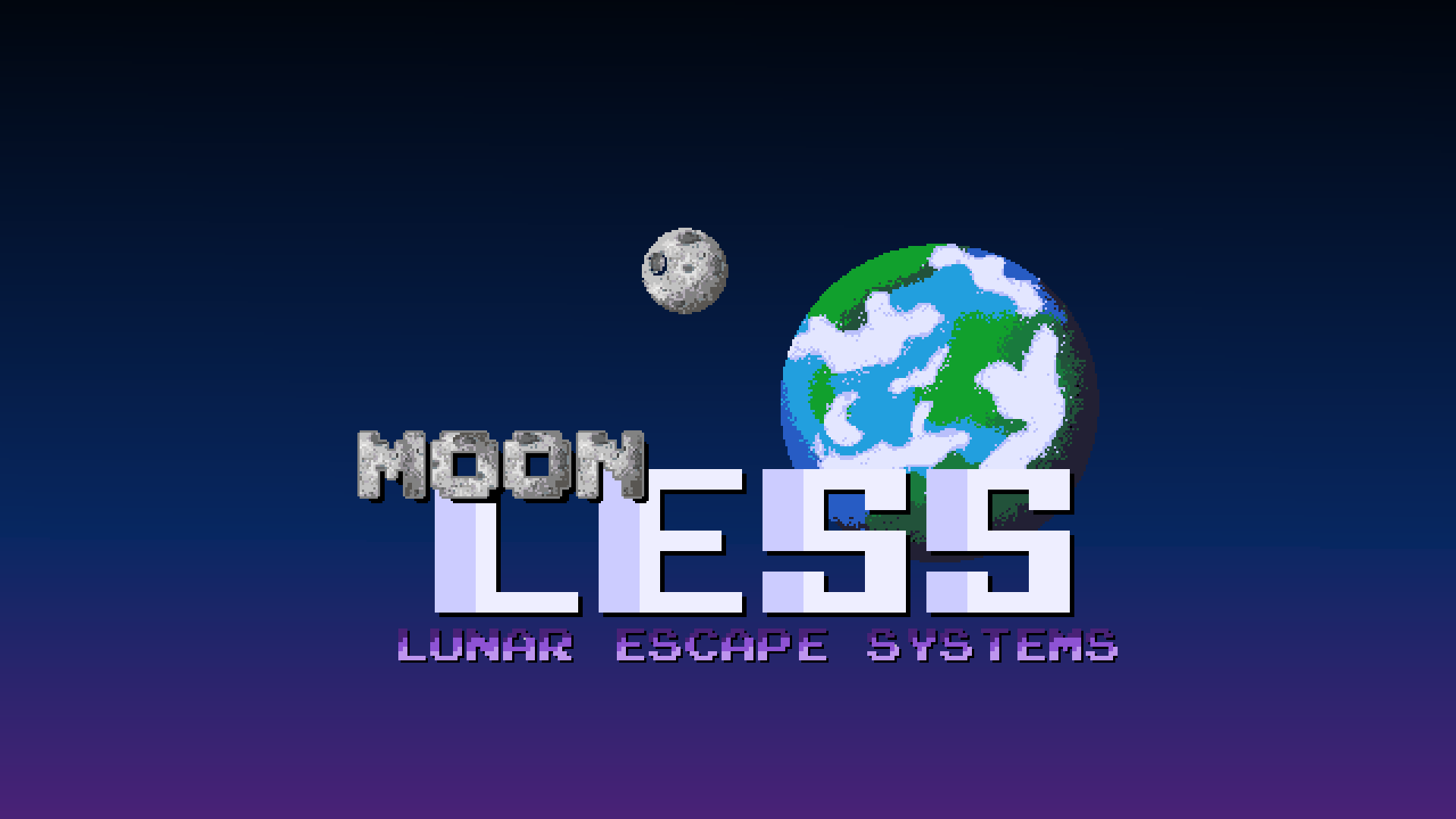 Hank, an American astronaut on a mission to build rocket launch pads on the moon, survives an attack on his base and needs to reach an escape vehicle called LESS - Lunar Escape Systems to return to Earth safe. 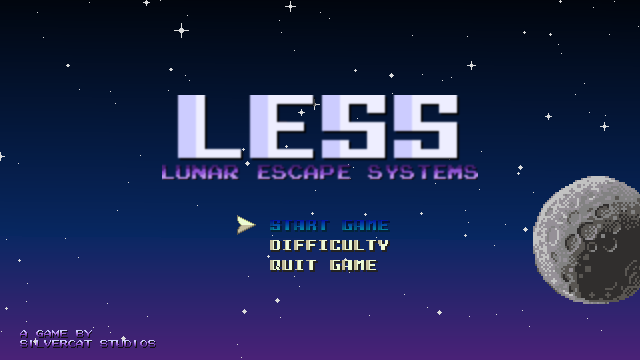 LESS is a side view platform game, where the protagonist must move from left to right, confronting obstacles and enemies to move to another screen until reaching the last one for the boss battle. In total there are 7 stages. 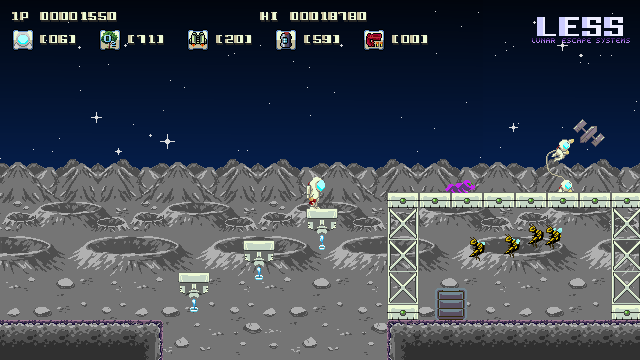 Hank has an unlimited single shot weapon, through a power up, can upgrade to double shot with a limited amount and another limited grenade power up as well. An oxygen cap (time limit to finish the level) and a jetpack bar (cooldown between uses). He walks right, left, crouch, jumps and flies with the help of his jetpack. 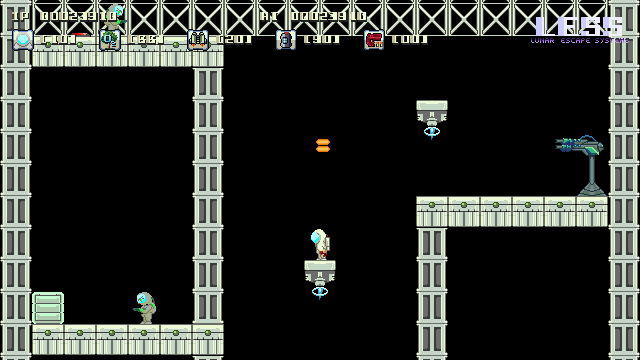 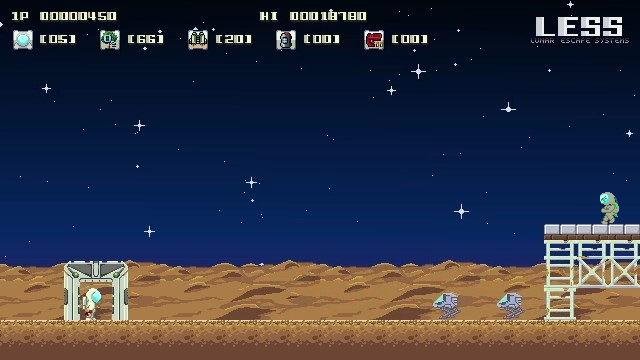 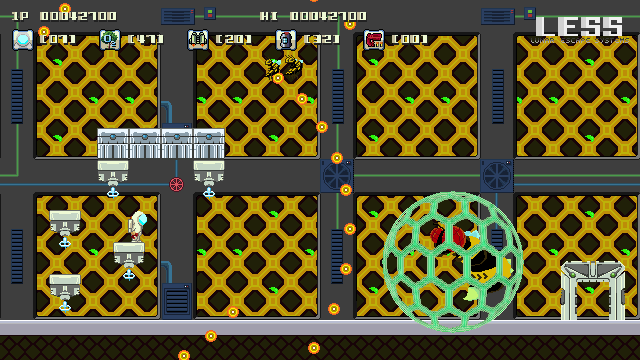 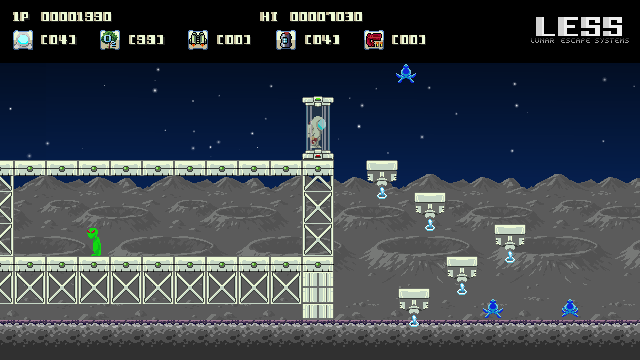 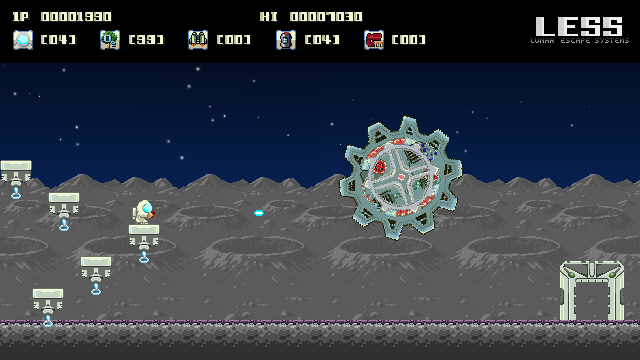 This game is in development. 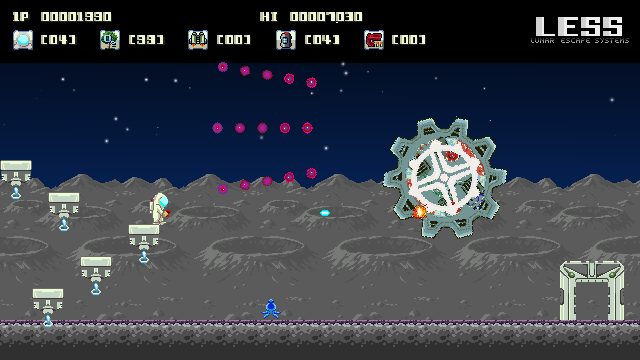